Our boy’s team travelled to Newbridge last Thursday to play Kilashee N.S. in the Cumann na mBunscol Basketball final. This was a great occasion for the boys and we started strongly putting 4 points up on the scoreboard during the first quarter. Damien and Kevin were calm under pressure as they stepped up to the free throw line to put Kilberry ahead. We continued to dominate in the second quarter and went in to the second half with a ten point lead.
Kilashee, however, began to cause problems in the third quarter and our lead was reduced to six points going into the final quarter. Kilashee began to show their hand and pushed Kilberry all the way to the final whistle. They managed to claw back a couple of points from free throws but as we approached the final few minutes of the game, Kilberry dug deep and our defense held strong as the final whistle blew to the delight of the Kilberry team and supporters.
Joe O’Connor presented the trophy to team captain, Kevin Eustace and complimented Kilberry and Kilashee on a fantastic display of basketball skill. In a display of sincere sportsmanship, the Kilashee team asked Kilberry for a group photograph after the presentation and we anticipate an exciting rematch with them during the blitz in March.
Team: Kevin Eustace (Capt.), Darragh Foy, Scott Downey, Jamie Whelan, Dean Owens, Seamus Hickey, Christopher Wilson, Emmet Fanning, Ciarán Dunne, Cian McKenna, Alex Delaney and Damien Moore. 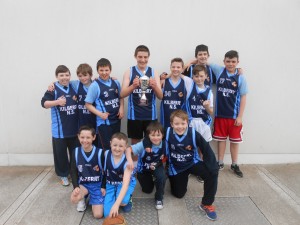 A team above all..Above all a team…! 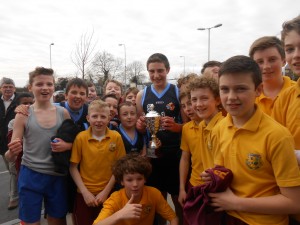 Kilberry and Kilashee pose for a post match photo! 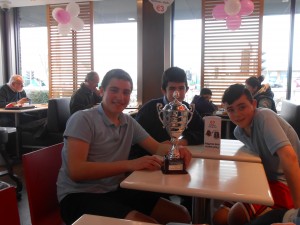 The team and the trophy enjoy a celebratory trip to McDonalds!! 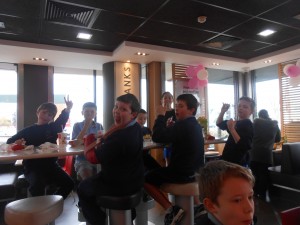 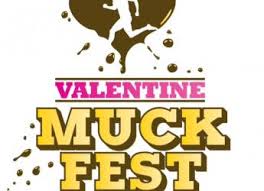 Countdown is on to the Valentine’s Day Muckfest!!

A brave group of parents and even one or two of our pupils are taking on the challenge of the Valentine’s Day Muckfest next week! They are collecting sponsorship to raise funds for our school. We wish them the very best of luck as they tackle the mucky terrain and obstacles of the course which includes a maze, tunnel of doom, cargo net, great wall, Thornhill pyramid, tyre squeeze and swamp crawl!!
They are participating in this madness for the children of our school so please give them your support and encouragement..
Thank you to the Parent’s Council for promoting the event on behalf of the school and good luck to Mrs. Dempsey who will also be taking part on the day. Go n-éirí an bóthar leat!

Help us to raise funds for our school!!!

As part of the Green schools’ initiative, we are collecting clothes for recycling, along with footwear, belts, hats, handbags, linens, household textiles etc. This is a great opportunity to spring clean those cupboards and help the school raise some money along the way! Please drop items into the school on or before 11th February.